Cuba is full of the sort of cars my Dad hankered after when I was growing up, the luxurious, fin-tailed extravaganzas of the Eisenhower era that are now only abundant on the streets of Havana

. Time-stopped by revolution, when the free flow of Detroit-made Cadillacs and Oldsmobiles was cu

t off in 1959, many of these magnificent relics now serve as taxis for awe-struck tourists to Cuba reminded of their American Graffiti pasts One night after dinner, our guide arranged for us to tour the city in vintage Buick and Pontiac convertibles featuring gleaming chrome, bench seats and cosmic hood ornaments. Resplendent in glittering tropical hues of turquoise, hot pink, canary yellow and lipstick red, but lacking seat belts and air bags, these roomy land cruisers easily fit four in the back seat.

I slid in next to our driver, an amiable Cuban with a gap-tooth smile, who steered one-handed, while I suspected his other arm was engaged in holding the car door closed.

It’s only when you’re inside one of these restored vehicles that you notice the patches of Bondo and miscellaneous wires dangling like spaghetti below dashboards. I don’t want to think about how many gallons to the mile these glamorous babes consume, but even a cloud of exhaust fumes couldn’t diminish the romance of gliding down boulevards in a vintage convertible under a starlit sky, a sultry breeze ruffling my hair.

But then, just as we were passing the decaying hulk of Meyer Lansky’s once-elegant gambling casino, my gallant driver turned snarly when a carload of wise guys jeered while trying to pass us on an inside lane.

Our driver floored it, pedal to the metal and I gulped a lungful of toxic fumes as we tore down the oceanfront boulevard in a drag race. I clutched the car door, which I discovered had no workable handle, my eyes trained on the sharp curve ahead. At the last crucial moment, my driver veered into the right hand lane, cutting off the carload of fist-shaking roughnecks —and I survived to tell the tale. 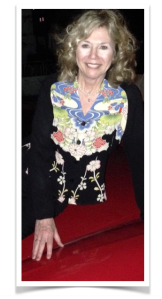 Basking in the afterglow of our thrilling high-speed race, I gave my driver the kind of sidelong glance Natalie Wood would’ve given James Dean. Then I wondered, was this staged for a carload of giggling touristas?